The Assessing low-Carbon Transition (ACT) Electric Utilities sector methodology is a product of the ACT initiative, which assesses an organisation’s readiness to transition to a low-carbon economy and aims to drive action by companies to move to a well-below 2-degree pathway in terms of their climate strategy, business model, investments, operations, and GHG emissions management. The ACT initiative, a joint project between ADEME and CDP, has created an overarching framework and sector-specific methodologies, of which the electric utilities methodology is one.

The ACT electric utilities methodology includes principles, scope, boundaries and performance indicators as well as performance, narrative and trend scoring explanations. The methodology was developed through research and multi-stakeholder dialogue. ACT builds on the Sectoral Decarbonization Approach (SDA), developed by the Science-Based Targets Initiative (SBTi), to compare a company’s alignment to the low-carbon pathway.

Together with ACT and CDP, the World Benchmarking Alliance (WBA) has translated this methodology into the Electric Utilities ranking. A summary and explanation of how it was applied is contained  here. This forms the second of a series of rankings within the Climate and Energy Benchmark of the WBA. This ranking series has so far measured and ranked the climate action performance of automotive manufacturers, and will measure and rank companies in other high carbon emitting industries, including oil and gas, within the decarbonisation and energy system transformation.

The WBA Electric Utilities ranking is a sector-specific ranking within the WBA Climate and Energy Benchmark. The Climate and Energy Benchmark will clarify where and how companies can contribute to SDG 13 and SDG 7 (among others) and the Paris Agreement, and incentivise them to align their strategies and operations with a well–below 2-degree pathway. It is part of the decarbonisation and energy system transformation  identified by the WBA as one of the seven system transformations required to achieve the Sustainable Development Goals (SDGs).

An assessment of the SDGs and corresponding targets demonstrated that the decarbonisation and energy transformation can have an evident impact on SDG 1 (no poverty), SDG 3 (good health and wellbeing), SDG 7 (affordable and clean energy), SDG 9 (industry, innovation and infrastructure), SDG 12 (responsible consumption and production), SDG 13 (climate action) and SDG 17 (partnerships for the goals), amongst others.

WBA benchmarks build on existing standards and norms and seek to draw on existing frameworks and initiatives. For this reason, the ACT methodologies have been adopted as suitable existing methodologies. The ACT methodologies, used to create the Climate and Energy Benchmark, can act as roadmaps, setting out how high-emitting companies can contribute to the decarbonisation and energy transformation and achieve SDGs 1, 3, 7, 9, 12, 13 and 17 – amongst others – and the Paris Agreement.

Before the Climate and Energy Benchmark began, a mapping exercise identified that The Taskforce on Climate-related Financial Disclosures (TCFD) was strongly aligned with the benchmark (although their objectives and audiences differ slightly). The Climate and Energy Benchmark uses data that the TCFD promotes the publication of, while the benchmark can allow financial actors to better understand transition risk. Both initiatives focus on companies’ governance, strategy analysis and metrics and targets, and aspects of risk management practices (such as low-carbon transition plan and climate change scenario analysis). You can read more about the relationship between the WBA Climate and Energy Benchmark, ACT and the TCFD below.

Industry scope of the ranking

The electric utilities sector covers four main activities: generation, transmission, distribution, and retail/marketing. The WBA Electric Utilities ranking focuses on companies with significant electricity generation activities because this is where the highest emissions impact of the sector lies, and therefore where the ACT methodology focuses its assessment. Generation emissions represent more than an estimated 90% of Scope 1 and 2 emissions of companies in the sector, and they represent uniform data that can accurately measure an electric utility’s low-carbon transition. Companies in the ranking may have other activities with significant emissions, which will be considered but only to the extent they reinforce or undermine the overall transition strategy of the company.

The activities of gas distribution and retail, mining of fossil fuel resources and maintenance of other utility networks (telecoms, water, etc.) are outside the scope of the methodology, although some companies in the sector also operate in these segments.

Company scope of the ranking

The electric utilities sector’s keystone companies are included in the Electric Utilities ranking. The ‘keystone company’ based on the concept and characteristics of keystone actors as defined by Österblom et al in 2015, as those that play a vital role in the industry and have a disproportionate effect on the structure and function of the system in which they operate. Of the potential keystone electric utilities, 50 keystone companies were selected to be included in the rankings based on the following criteria:

Read more about how our work relates to the TCFD

For the electric utilities’ performance assessment, company data is analysed across six modules: targets, material investment, intangible investment, management, policy engagement, and business model. Each of these modules contains indicators, and each module and indicator has a weight (see figure below). The weights are guided by the principles of value of information, impact of variation, future orientation and data quality sensitivity. 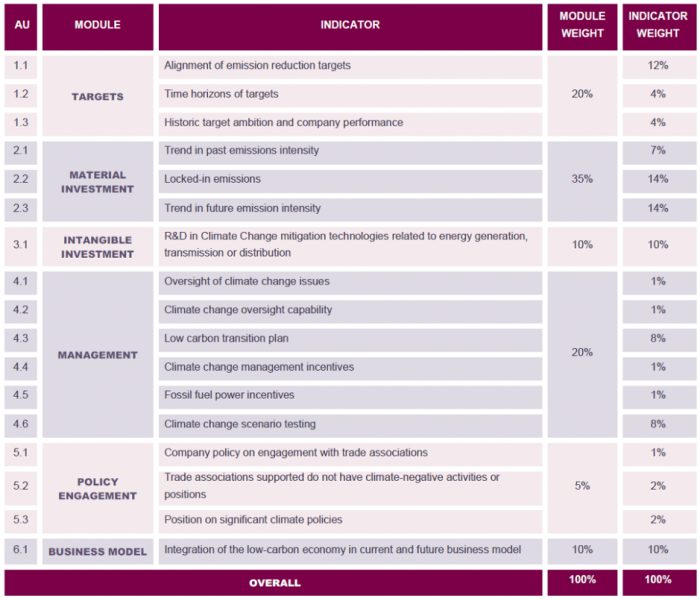 A company’s module-level scores, and the overall performance score, are presented in each WBA company scorecard. The text in the “Leading practices” and “Risks and opportunities” sections give additional commentary on a selection of performance assessment modules.

The narrative assessment is an overall analysis of all available data sources (including sources additional to those used for the performance assessment) to establish a company’s state of alignment with the goals of the Paris Agreement. The narrative assessment considers the performance assessment, as well as further analysis of available information on the company based on four criteria: business model and strategy; consistency and credibility; reputation; and risks. The overall narrative score is presented in each WBA company scorecard. The section “Progress towards the Paris Agreement” provides additional commentary on each detailed element of the narrative assessment: commitments, transition planning, present activities, legacy, and consistency.

For the trend assessment, the company is assigned a “+”, “=”, or “-”, depending on whether the analyst deems that the future company will be less, equally or more able to meet the requirements of the low-carbon transition in a re-assessment in the near-term. This is presented in each WBA company scorecard. The section “Trend” provides additional commentary on the trend assessment.

Approach to scoring and ranking

The analyst applying the ACT methodology assessed the data and gave a score per indicator which is used to calculate the performance element of the ACT score. The narrative assessment was then produced according to the narrative score principles by referring to both the information considered for the performance assessment; plus other verifiable public data on the company such as annual and sustainability reports and news from reliable sources. Finally the trend score was produced synthesising the forward-looking aspects of the assessment to give a view of the future likely trend in company performance.

To create the overall Electric Utilities ranking, a weighting was applied to each of the performance, narrative, and trend scores as follows:

This overall weighted score resulted in the Electric Utilities ranking.

Total figures for performance assessments can be subject to rounding differences, but this has not had any overall effect on the ranking.

Each assessment is of the company named in the scorecard and, where relevant, any subsidiar(ies) with activities relevant to the ACT electric utilities methodology.
Data was collected in Q1 2020. In the first instance from CDP’s disclosure platform where possible, as well as using publicly available sources from databases, company websites, including sustainability and corporate responsibility reports.

Companies were also invited to directly participate in the data validation process by both by  reviewing data collected to date, and submitting additional information as required during a three-week period, tailored to the date from which the company was contacted with its pre-populated data file, between April and May 2020. Companies are informed that additional data will not be accepted after the three-week window has passed unless explicitly agreed in advance.

Scores for each company are available publicly, for all stakeholders to access and use:

Each company also received an ACT feedback report privately, which included more detail on the assessment and suggested areas for improvement.

The ACT electric utilities methodology was developed according to a robust, credible, and replicable process. It was built based on extensive research and outcomes resulting from multi-stakeholder dialogues.

The ACT electric utilities methodology was developed by CDP and ADEME during 2016. ACT methodologies are based on the principles and guidelines of the publicly available ACT Framework.

The ACT electric utilities methodology was developed in consultation with companies and experts in the electric utilities sector. Pilot companies reported against the methodology during a road test and received an ACT pilot assessment and rating privately. Uniper, SSE, AGL, NRG, Enel, Endesa, Engie and EDF participated in this road test. The methodology had input from a Technical Working Group (TWG), Advisory Group, and public consultation which was open in Q2 2016. You can find out more via the ACT initiative website: https://actinitiative.org/ and about the participating bodies and companies here: http://actinitiative.org/about-us/.

Feedback from the TWG, Advisory Group, and public consultation informed the direction of the methodology and consultation feedback was considered in the final published version of the ACT electric utilities methodology.

In July 2020, the WBA Electric Utilities ranking, key findings and company scorecards were published online, with the ranking officially launched virtually on 6 July 2020. The draft WBA company scorecard and ACT feedback report was made available to each company in advance to inform them of their ACT rating and mean rating for the 50 companies in the ranking.

The decarbonisation pathways per region come from the IEA ETP 2017 dataset for power sector generation and emissions. The dataset is available here https://www.iea.org/reports/energy-technology-perspectives-2017. This modelling splits the world into 11 geographical regions and the scenario builders elected to include negative emissions predictions for the power sector for all but four of these regions. These negative emissions intensities will require technology to divert and remove greenhouse gases from the atmosphere and permanently store it in  geological formations, so that there is a net carbon removal from the atmosphere. To fully align their low-carbon  transitions to the company pathways required under this scenario, most of the companies in this ranking need to be working towards carbon removals. Achieving net-zero emissions intensity by 2050 will not be enough.

The Beyond 2°C Scenario has been used for this July 2020 ranking of keystone companies in the electric utilities sector. The IEA is due to publish a new edition of ETP in September 2020. CDP, ACT and WBA aim to use the most ambitious scenarios available, both in future iterations of this ranking as well as in ranking of other sectors.

You can read more about the application of the sector and company benchmarks and other quantitative benchmarks in the ACT electric utilities methodology: https://actinitiative.org/resources-2/

All monetary values are expressed in US dollars (US$) using the xe.com conversion rate as at 1 January 2020.