The decisions electric utility companies make about which power plants they intend to continue to use, refurbish and build – their assets and portfolios – were assessed as indicators of companies’ intention and ability to transition to a low-carbon future.

The assessment applied the International Energy Agency’s Energy Technology Perspectives Beyond 2°C Scenario, which generates a well-below 2-degree decarbonisation pathway with a target for the whole electric utilities sector to converge at net-negative emissions by 2050. Why incur all the decommissioning and clean-up costs associated with fossil fuels, if new low-carbon and, in many regions, cheaper energy technologies are increasingly available?

However, the results show that heavy reliance on fossil fuels and associated infrastructure means companies across the sample are effectively binding themselves, society and the economy to a high-carbon future.

As a result of emissions already ‘locked-in’ – which are the emissions from a company’s current and expected electric power plants – 70% of companies assessed will exceed their well-below 2-degree carbon budgets between 2019 and 2033, reducing their ability to transition to renewable fuel sources and deliver on the 2030 agenda and Paris goals.

The ten worst performers on future emissions projections – which together have just over half of the electricity generation capacity of the 50 companies – account for 97% of the projected emissions that will exceed the well-below 2-degree pathway between 2018 and 2033. Five of these companies are headquartered in mainland China, four elsewhere in Asia and one in Egypt. Six of these are also in the top ten for highest emissions intensity. This shows that the worst performing companies by future emissions projections tend to be the biggest by installed generation capacity, fossil fuel use and emissions intensity. Without dramatic cuts in fossil fuel generation by the worst emitters, any progress by the rest of the sector will be undermined.

Between 2018 and 2033, the locked-in emissions from 33 of the 50 companies are estimated to exceed the well-below 2-degree pathway by 23.5 billion metric tons – 54% of the carbon budget for these 50 companies. Against an updated and more ambitious 1.5-degree scenario, the amount of excess carbon will be even higher. Companies must act now to decarbonise their asset portfolios and avoid stranded assets.

Powering past coal will enable the low-carbon era.

Climate Analytics report that, as the highest emitting fuel, unabated coal use needs to be phased out in EU and other OECD countries by 2031 and the rest of the world by 2037. Electric utilities must commit to this phase-out to become the great enabler of the low-carbon era and achieve the Paris goals. However, only eleven companies have a phase-out date for coal. Only Ørsted has a clear, firm commitment to exit all fossil fuels (by 2023). A further five companies (RWE, CEZ, E.ON, Iberdrola and EDF) have a commitment to carbon-neutral generation (some also including a coal phase-out), all with target dates between 2040 and 2050.

Coal capacity across all the 50 benchmarked companies is projected to be relatively constant up to 2033, while gas will decrease. Renewables look likely to eat into natural gas’ share, even though unabated coal should be phased out soonest. Furthermore, in China, India and many emerging economies, new power plants are often coal and existing coal capacity is much younger, with lifetimes extending into the 2030s and 2040s. The five mainland China-based companies with large fossil fuel capacity have the fourth to eighth youngest fossil fuel fleets in the sample, due to the massive growth in coal power over the past two decades in China. Electric utilities should stop developing new unabated coal and gas assets, shut down existing ones and instead invest in low-carbon generation.

Where are the 50 companies heading?

The assessment looked at whether the companies’ ratings would improve (+), worsen (-) or stay the same (=) if the assessment were repeated in the near future. 33 of the 50 companies received a ‘negative’ rating, 12 ‘equal’ and five ‘positive’. 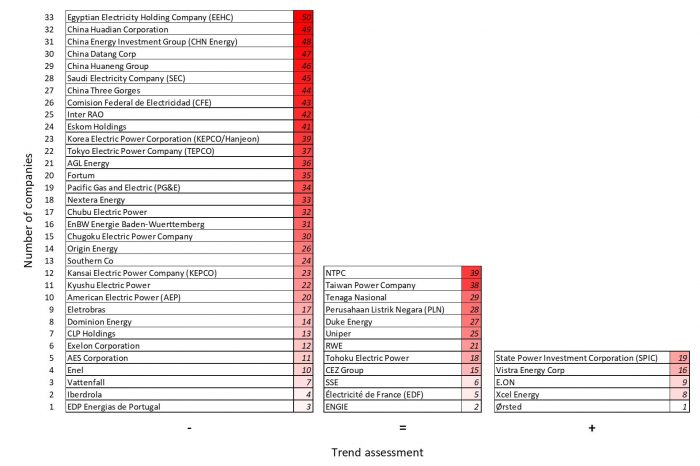 Companies must continuously improve their performance to achieve the decarbonisation and energy transformation needed to meet the Paris goals. Even companies with a relatively strong performance rating look set to fall behind. Only five companies are expected to improve their alignment with the transition pathway required. Of these, Ørsted is the overall top performer.

Low-performing companies clearly need to change their approach radically. Egyptian Electricity Holding Company has no transition plan, no decarbonisation targets and no evidence was found of climate change awareness. China Huadian also lacks a transition plan and decarbonisation targets. Its coal-fired generation is even expected to increase. Fortum’s climate strategy does not provide details about its plans to decarbonise its gas-intensive Russian business, and its recent acquisition of fossil-fuel-heavy Uniper significantly increases the proportion of high-emitting assets in its portfolio.

Even higher performing companies need to increase their efforts to avoid falling behind the transition required. So far, Iberdrola’s emissions reductions have been in line with its well-below 2-degree pathway, but by 2023 the company’s targeted ambition and projected emissions reductions are due to fall short of what is required.

Companies with lower overall emissions intensity may consider they have done enough compared to their peers. However, to keep cumulative emissions within the carbon budget for the electric utilities sector as a whole, these lower intensity companies need to show true leadership, build on their progress to date and remove any remaining unabated fossil fuel generation.

The great disruptor can energise the low-carbon transition