London / Amsterdam, 22 July 2021: The most comprehensive study of the oil and gas industry’s performance against the Paris climate goals today shows that, without immediate and decisive action, the sector would prevent the world from meeting the IPCC’s 1.5°C global warming scenario by 2050.

The benchmark from the World Benchmarking Alliance (WBA), alongside partners CDP and ADEME, includes private, state-owned and publicly listed companies assessed using CDP’s and ADEME’s Assessing low Carbon Transition (ACT) methodology. This is the first time the industry has been judged against a 1.5°C scenario – the most ambitious emissions reduction plan proposed by the Paris Agreement, and the first study to assess oil and gas companies using the International Energy Agency’s (IEA) Net Zero Emissions by 2050 scenario.

Assessing 100 of the world’s biggest oil and gas firms against this scenario, it shows that based on current rates of production these companies are set to consume the sector’s allocated carbon budget (from 2019 to 2050) by 2037 – 13 years too early. Despite this trajectory, researchers found that none of the 100 companies have committed to stopping exploration. Other key findings include: 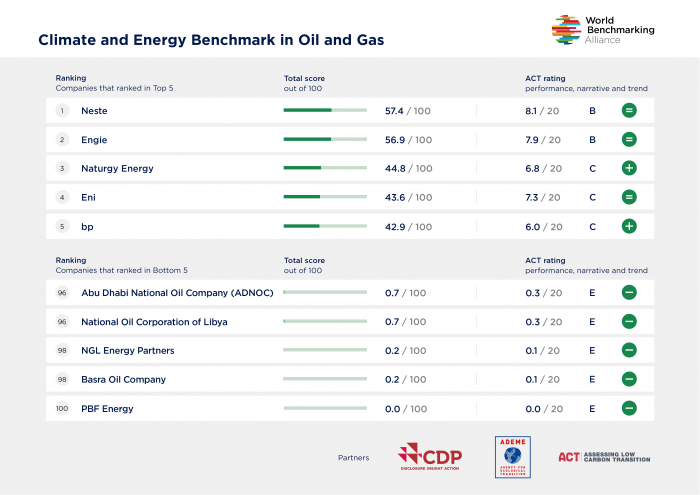 State owned companies emerge as the ones that hold significant influence, but are severely lacking in corrective action, eating into the IEA’s remaining overall carbon budget (for all sectors).

Oil and gas extracted by the 100 companies assessed is set to use up nearly 80% of the remaining CO2 budget for all sectors and all human activities. State-owned companies will take up half the remaining carbon budget (54%). The seven oil majors (BP, Chevron, ConocoPhillips, Eni, ExxonMobil, Shell and Total Energies) account for a further 13%, and independent companies 12%.

Sector marked by lack of ambition and action

There is also an overall lack of comprehensive and comparable climate reporting in the sector. Crucial gaps include emissions data, with most companies sharing only partial data across scope 1 and 2. Only a third of the companies, including Galp, Repsol & Equinor, disclose information on scope 3 emissions.

Research & Development (R&D) is another area where companies are yet to show action, despite many referencing “new technologies” as the future of the industry in their transition plans. While more than half of those assessed have disclosed R&D expenditure, only 17 companies report information on the proportion of investment dedicated to low-carbon technologies in 2019. Worryingly, even fewer (just 12) publish information on low-carbon capital expenditure investment plans to 2024 and these planned investments remain too low to enable a shift to a low-carbon world.

Every company, policy maker and investor is aware of the urgent need to prioritise decarbonisation and energy transformation, but awareness has not led to sufficient action

In a world powered by a new era for energy production, oil and gas companies find themselves at a crossroads – transform or become redundant. They can no longer plead ignorance of how urgently change is needed. The industry must acknowledge the wholesale transformation required to survive and signal the steps it is taking to meet this challenge

“The progress of the oil & gas industry worldwide is woefully inadequate if we’re going to limit global warming to 1.5°C by 2050. If we want to meet the IEA’s 1.5°C scenario, that means total transition away from oil and gas production as a society and the inherent transformation of fossil fuel-based business models. Governments clearly also have a critical role to play, and this new benchmark from WBA, CDP & ADEME shows that the industry simply is not doing enough to make this happen.

“It’s important that companies also recognise how crucial efficient disclosure on climate targets is, if they are to be held accountable on their own climate commitments and if we are to see the climate ambitions of the international community fulfilled.”

“Time is ticking, the oil and gas companies have now less than a decade to radically shift from the problem side to the solution side by becoming decarbonized energies and associated services providers. Now, thanks to the first Oil and Gas Benchmark by WBA using ACT methodology, governments, financial regulators, civil society and investors can watch and monitor the transition progress. The actual race to zero shall begin.”, says, Baptiste Perrissin Fabert, Executive Director of Expertise and Programmes, ADEME.

The full Oil and Gas Benchmark, insights report and individual company scorecards are publicly available on WBA’s website here. All companies assessed in this benchmark are part of WBA’s SDG2000, a list of the 2000 most influential companies towards achieving the Sustainable Development Goals (SDGs).

Coinciding with COP26 (26th United Nations Climate Change Conference) WBA is also planning to publish research on 180 companies in high-emitting sectors (Electric Utilities, Automotive and Oil and Gas) on their contribution to a just transition by assessing their alignment with the goals of the Paris Agreement alongside their approach to addressing the social challenges of a low-carbon transition.

The decarbonisation of our global economy will only succeed if climate action includes solutions for workers and communities – the social component – in what is known as a ‘just transition’. As influential actors in the ecosystem, these keystone oil and gas companies must address both their responsibility to reduce emissions and do so with respect for human and workers’ rights