Hunger is a daily reality for almost one billion people around the world. In 2020 alone, an additional 148 million faced hunger, owing to the COVID-19 pandemic, climate variability, conflict, and economic downturn. Many of the world’s 400 million small-scale farmers live and work precisely in regions affected and considered food insecure. As producers of a large part of the world’s food, they are key to meeting daily and future food demands. Therefore, they should be empowered as active agents for achieving the UN SDGs, explicitly ensuring food security, ending hunger, eradicating poverty, conserving biodiversity, and achieving environmental sustainability. At the start of the food value chain, the seed industry plays a crucial role in sustainable food systems.

The Access to Seeds Index highlights the efforts of seed companies to improve access to seeds for smallholder farmers in emerging economies. Small-scale farmers often lack opportunities to access markets and can benefit significantly from increased knowledge, technology, and resources that companies can provide. The index seeks primarily to identify leadership and good practices across the seed industry, providing an evidence base for discussing where and how companies can step up their efforts.

The 2021 Access to Seeds Index evaluates the efforts of 32 leading companies in Western and Central Africa on six measurement areas. Showing a presence with sales of both global and regional companies in 21 indexed countries except Guinea-Bissau. Company extension services support sales in 18 countries, six more countries than in 2019, but are entirely lacking in countries. The companies also provide farmers with diverse crop portfolios, including local crops important for smallholder farmers. Overall, the seed industry in the region is still in its early stages of maturing. A few companies, mainly regional, invest in local business activities such as breeding programs, seed production, and seed processing, particularly in Nigeria, Ghana, Burkina Faso, and Côte d’Ivoire. Some companies involve smallholder farmers in seed production activities to produce seeds under contractual arrangements, which helps generate income and transfer knowledge. An area of improvement identified within business activities was the lack of adequate systems to ensure social and labour standards across seed production activities.

Regional seed companies still prioritise sales in their home country; only a few companies have a regional presence

In Western and Central Africa, almost all index countries have two or more companies present with the most presence in Ghana (16 companies), Senegal (13), Nigeria (13), and Burkina Faso (13). The only country with no company presence reported in 2021 is Guinea-Bissau.

Smallholder farmers in Western and Central Africa dominate the agricultural systems and play a key role in feeding the region’s communities. Global, regional, and homegrown companies contribute to access to diverse and quality seeds essential to improving food production, income, and livelihood of many small-scale farmers in remote rural areas challenged with limited infrastructure or distribution channels.

The 32 companies with presence and sales in Western and Central Africa report reaching farmers in almost all index countries. Two or more companies reported presence per country, but no company reports presence in Guinea-Bissau. On the other hand, the highest concentrations of seed companies were reported for Ghana (16 companies), Senegal (13), Nigeria (13), and Burkina Faso (13).

Many smallholder farmers live in remote areas. Companies report selling seeds in remote areas through a multitude of means. The most common avenue is to work through agro-dealers, agro-vets, or agricultural supply stores, usually in rural villages across countries. However, due to the COVID-19 pandemic, companies report implications on distribution channels where outlets and agro-dealer shops closed, and companies faced increased transport costs at the local and international levels. As a result, companies had to develop new channels and strategies to build resilient supply chains and address gaps in access to digital marketing for smallholder farmers.

According to the 2021 UN report on The State of Food Security and Nutrition in the world, in Western Africa, 85.5 million people and 62.1 million people in Central (Middle) Africa faced severe hunger in 2020. The sharpest increase in undernourishment in 2020 was in Western Africa at 5.8% (24.6 million more people) just in one year. The efforts of the global and homegrown seed companies hold the key to advancing food security and actions to end hunger by establishing a reliable supply of essential and quality seeds of improved seed varieties to the smallholder farmers responsible for feeding these communities. 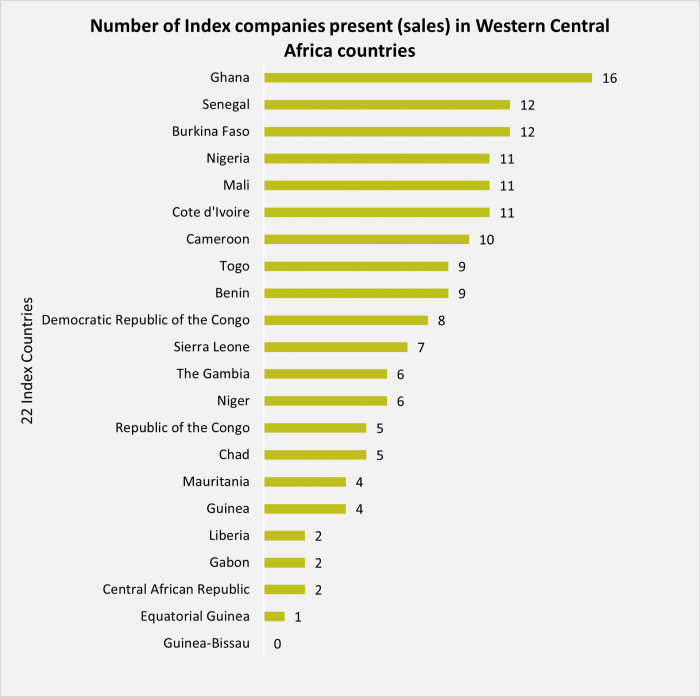 Companies reporting extension services in the region have increased since 2019 from 12 index countries to 18 countries in 2021. In addition, while there was an increase in programmes offered to next-generation farmers, companies should also pay attention to programmes explicitly targeted towards women.

Smallholder farmers, including women farmers and youth – the next generation of farmers, need support beyond the purchase of seeds to learn how to adopt improved agricultural technologies to realise the potential of high-yielding crop varieties through training activities.

Most companies target smallholder farmers in Ghana and Nigeria to offer extension services, followed by Burkina Faso, Côte d’Ivoire, and Senegal. But such efforts are lacking in Liberia, Central Africa Republic, Equatorial Guinea, and Guinea Bissau, leaving many smallholder farmers with little or no knowledge on how to maximise the improved seed varieties’ potential, increasing the challenges to end hunger and malnutrition in these countries.

Overall, companies generally report minimal disruptions to offer extension services to farmers in the region due to the COVID – 19 pandemic. Companies report responses and challenges ranging from financial donations to mitigate the impact of Covid-19 and significantly fewer field visits due to travels restrictions. Companies relied on local teams living close to local farmers and adapted digital tools to engage with farmers, such as phones, WhatsApp, emails, and other social media.

Companies are accountable for the results and impact of their seed. Although improved since 2019, capacity building by companies still demands further investments and is essential for increasing the impact of the seed on food security. 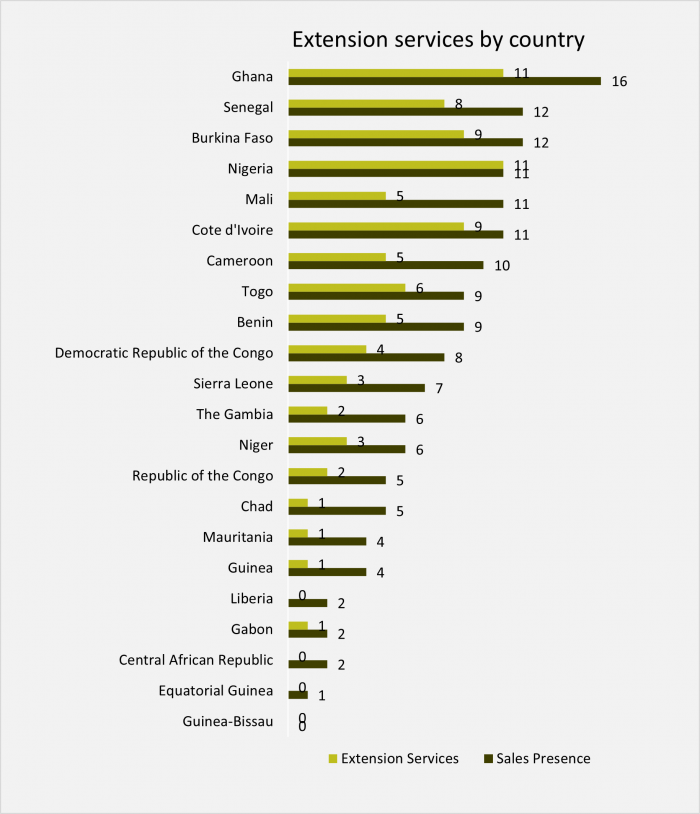 Smallholder farmers should have enough seed of suitable crops for critical sowing periods and in a continuous and reliable supply. The majority of the seed companies’ portfolios in Western and Central Africa are diverse for vegetables and field crops. Seven companies also reported offering local crops, reaching from African eggplant and Brede mafane to yam.

Access to diverse crops from cereals to pulses and vegetables gives farmers a choice of growing suitable crops that can increase diverse, healthy, and sufficient diets for home consumption and the market. Up to 20 companies report having cereals and pulses in their field crop portfolio. Most companies offer cereals such as maize (20 companies), rice (17), and sorghum (16).
In addition, companies provide multiple pulses – essential for nutrition – in their field crops portfolios, such as soya bean (17 companies), cowpea (10), and groundnut (8). Furthermore, in 2021 companies also reported pulses under-reported in 2019, such as dry beans (8) and pigeon pea (2), although no company reported offering chickpea. Fourteen companies also report oil crops in their portfolios, such as sesame and sunflower, while nine companies offer potatoes.

Companies’ vegetable crop portfolios are diverse for global active and regional companies in the region. The most offered global vegetable crops are pepper (sweet) (22 companies), cucumber (22), onion (22), and tomato (22). On the other hand, green pea is the least offered by the companies (8) in Western Central Africa.

In addition to the global field crops and vegetables, having access to good quality seeds of traditional and local crops serves smallholder farmers. These crops are part of local agrobiodiversity and contribute to a diverse diet. In the region, seven companies offer thirteen such crops, one of them being a homegrown company, Da-Allgreen Seeds, two from outside the region, Seed Co and Novalliance Group, and four global active companies Advanta, Rijk Zwaan, Bayer, and East-West Seed. The company offering most local crops in the region is Novalliance Group.

Open Pollinated Varieties (OPV) continue to dominate the company portfolios with an increase in hybrids.

Commercial farming relies on hybrid varieties for many crops. They are economically more attractive for seed companies as they cannot be reliably re-sowed; hence, they need to be repurchased each growing season. In comparison, smallholder farmers and subsistence farming rely mostly on open-pollinated varieties (OPVs) that can be re-sowed. Although hybrid seeds lead to higher yields than OPVs, buying new seeds for every crop season increases farmers’ financial burden, particularly for subsistence farmers still living in poverty.

Age of the youngest varieties on the market

The age of the youngest variety for a crop in the portfolio indicates whether companies are frequently releasing new varieties that can help farmers cope with new developments such as new pests and diseases or changing weather conditions because of a changing climate.

Nigeria, Ghana, Burkina Faso, and Côte d'Ivoire attract most of the companies for investment in business activities

Seed companies can advance the development of local seed sectors by investing in seed business activities such as breeding, seed production, and processing. From a business perspective, it can be logical to concentrate these investments in a small number of countries. Other factors, such as climatic context, the enabling environment, such as regulation and infrastructure, or the availability of local skilled staff, influence where companies choose to invest.

Western and Central Africa based companies have breeding activities, seed production, and/or seed processing activities mainly in their headquartered country. NAFASO stands out because it also has such investments in Côte d’Ivoire and Ghana, in addition to Burkina Faso. France-based Novalliance Group has breeding activities in Burkina Faso, Cameroon, and Senegal. South Africa-based Seed Co has breeding programmes, seed production, and seed processing in Ghana and Nigeria.

Ten out of 14 regional and global companies investing in seed production activities involve smallholder farmers to produce seeds, which helps generate income and encourages knowledge transfer. However, a key area of improvement identified within business activities was the lack of adequate systems to ensure social and labour standards across seed production activities. Although the majority of companies mentioned that they do not employ child and forced labour and commit to respecting the health and safety of workers, sometimes disclosing policies on these, in many cases, they lack consistent monitoring systems to ensure that compliance towards these standards is met.

Furthermore, no company in the region reported ensuring that workers in their seed production activities were paid a living wage or requiring its intermediaries to do so. Paying workers and contractors a living wage rather than just the official minimum wage is another crucial issue requiring the industry’s action. More stringent standards and monitoring systems should be applied to ensure that workers’ social and labour rights are met in seed production.

Other constraints in investing in local seed business activities include national regulatory and legal frameworks often hamper company operations. These constraints inhibit market entry into and seed trade within regions and between countries. Thus, the role of the public sector alongside investors is critical in addressing the market entry constraints of seed companies.