London/Amsterdam, 29 June 2021: The World Benchmarking Alliance (WBA) has today shared its concerns over the apparel sector’s lack of action when it comes to corporate and supply chain measures to protect the millions of women who work in the fashion industry.

WBA has been researching the industry’s 35 largest apparel companies in the past year to produce its first Gender Benchmark, which evaluates how these companies are addressing gender inequalities and empowering women.

The Gender Benchmark identified that most companies are failing to translate their public commitments on gender into meaningful action. The industry’s fashion giants scored an average of 29 points out of a possible 100, signalling a concerning lack of action taken by companies. Adidas, Gap Inc and VF Corporation – known for brands such as The North Face, Timberland and Vans – are the only three companies to score above 50 points, topping the ranking. 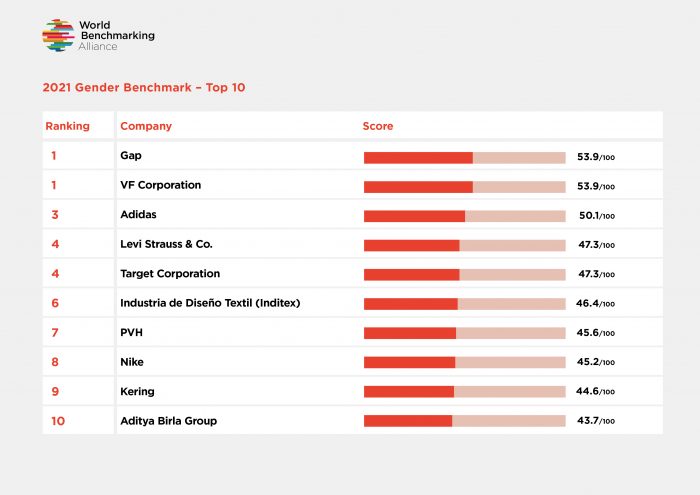 Apparel isn’t walking the talk when it comes to gender equality,” explains Pauliina Murphy, Engagement Director at WBA. “For decades, these companies’ clothes have dressed and inspired millions of women. But the same clothes are empowering some at the expense of others. We’re used to the term ‘fast fashion’ – after all, apparel moves quickly to make profit and drive sales, but we see a marked difference between what companies say and do on vital issues such as pay, gender balance in leadership and violence and harassment. This lip service has to stop.

The gap between ambition and action
WBA research shows that 24 out of the 35 benchmarked companies have yet to make public commitments to gender equality and women’s empowerment. Only 14 companies appear to have integrated gender into their business strategy across their value chain, meaning they have gender specific policies on areas including pay, leadership, as well as violence and harassment. However, only seven companies have disclosed two or more targets concerning these policies. Data also shows a lack of involvement from their board of directors when overseeing progress on annual gender targets, with only four companies demonstrating such involvement.

While a majority of companies engage with external stakeholders to inform their gender efforts, less than a quarter communicate with their own employees through surveys and company discussions.

Similar sentiment is displayed regarding pay, with companies failing to be transparent about their gender pay gaps. While half of companies report their gender pay gap in either France or the UK – where mandated by law, only Adidas and Inditex collect data on salary differences at a global level. These fashion giants, along with Fast Retailing, are the only three companies that show they are taking active steps to address gender pay gaps in their workplace.

In the supply chain, Zara owner Inditex is the only company requiring suppliers to pay workers a living wage. A further five companies – Adidas, H&M, Inditex, Kering and PVH – are taking steps to help ensure suppliers pay their workers a living wage by conducting wage assessments in factories and promoting industry collaborations.

Public commitments are an initial step. But our evidence tells us they are a smokescreen for a lack of real ambition. We know the fashion industry can work quickly to turn around new, cutting-edge ideas. It is time this creative way of thinking is applied to their gender policies too. The industry has a duty to empower the women it depends on in ways far beyond what they wear. We shouldn’t get complacent – there’s still a long way to go

The full Gender Benchmark, its ranking and individual company scorecards are publicly available here. All companies assessed in this benchmark are part of WBA’s SDG2000, a longer list of the 2,000 most influential companies towards achieving the Sustainable Development Goals (SDGs). All 2,000 companies will be assessed and ranked by 2023. WBA insights aim to serve as an accountability mechanism, incentivising companies to become a successful driver of change and deliver on the SDGs.

Learn more about the Gender Benchmark