A region with far to go.

The 15 companies headquartered in Eastern Asia have a mean average owned installed generation capacity of approximately 84 GW – far higher than the average for companies in Northern America or Europe (of approximately 52 GW). They also have a far higher average emissions intensity: 553 gCO2e/kWh (versus all 50 average of 446 gCO2e/kWh). As some of the biggest by capacity, their reductions can have the greatest impact on emissions overall. Read more in our first key finding. 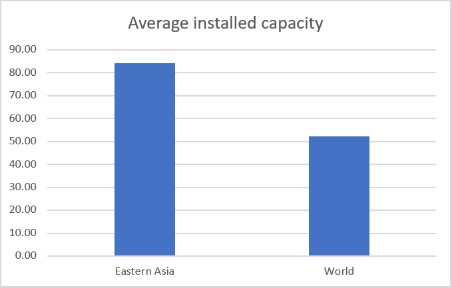 Can company targets and actions that are insufficient to achieve Paris be symptoms of an unambitious policy environment?

An example of leadership in the region is CLP Holdings. It shows leadership on policy through its participation in the World Business Council for Sustainable Development and the Energy Transitions Commission, and CLP’s CEO chairs Hong Kong’s Business Environment Council. It is the highest performing company of all 50 assessed for policy engagement. CLP has also crucially committed to not building any further coal-fired electricity generation, a commitment not made by any of the other East Asian electric utilities assessed.