Following our benchmarking exercise for 100 keystone companies in the oil and gas industry, we asked the following question: What are companies’ impacts in their regions, and how do these companies keep up with the regional targets and road maps for a low-carbon transition?

We narrowed down the scope of companies for an in-depth look at their footprints in the regions where they operate. To make sure the companies included are widely representative, we considered company size, ownership structure, headquarter location and data availability. Using all these criteria, we selected following 5 companies to be included in our case study, Ecopetrol, Exxon Mobil, OMV, Origin Energy and Pertamina, with good representation for Europe, North America, South America, and Asia-Pacific.

Focusing on these five influential companies within their regional context, we highlight their sizes in terms of employees and number of operating locations, and we ask the question: how can they further influence action in the industry and in their region by their peers? We also share our learning from these companies and outline their ambition for the low-carbon transition. Taking national targets and goals into account, we give insight into the alignment between the ambitions of these companies and their countries.

Ecopetrol is the largest primary oil and gas company in Colombia, and one of the four principal petroleum companies in Latin America.

Ecopetrol is a publicly listed integrated oil and gas company headquartered in Bogota, Colombia. In 2020, it reported a revenue of USD 14.61 billion and produced 697,000 barrels of oil equivalent per day.

Ecopetrol also owns a 72.65% share in the Colombian company OCENSA, whose pipeline transports 75% of the country’s produced oil, making it the largest oil pipeline in the country and highlighting Ecopetrol’s role in Colombia’s oil industry. Alongside oil and gas, Ecopetrol operates in petrochemicals and biofuels.

The map below shows the locations of Ecopetrols’ operations based on the company’s list of subsidiaries with greater than 50% ownership.

Exxon Mobil is one of the world’s largest companies by revenue and is headquartered in the USA. With its vast global presence, its impact is not only limited to the USA but is evident worldwide.

Exxon Mobil operates within the United States and in many other countries across the globe. In 2020, it reported a total of 72,000 regular employees across the company. The company defines regular employees as active executive, management, professional, technical and wage employees who work full-time or part-time for the corporation and are covered by the corporation’s benefit plans and programmes. The company doesn’t disclose the number of contractors, but does report that 40% of its workforce are from the USA.

While most of Exxon Mobil’s subsidiaries are located in the USA, the company has more than ten subsidiaries in other countries including Australia, Canada, France, Germany, Netherlands, Papua New Guinea and United Kingdom. The map below shows the significant presence of Exxon Mobil in different countries.

Map data is based on the size of primary operations as outlined in Exxon’s annual report.

One of the largest publicly listed companies in Austria, OMV has oil and gas operations in various countries across Europe.

OMV is a publicly listed integrated oil and gas company headquartered in Vienna, Austria with 31.5% owned by the government of Austria. OMV reported a revenue of USD 20.76 billion in 2020, with 25,000 employees primarily working across the company’s integrated operations in Europe. In 2020, OMV produced 463,000 barrels of oil equivalent per day (boepd), 62% of which was contributed by gas and 38% by oil.

OMV has upstream activities in 12 countries across five key regions. Its operations in Austria, Romania and Kazakhstan, account for most of its oil and gas production with a total of 167,000 boepd. Its other four key regions, the Middle East and Africa, the North Sea, Russia and Asia-Pacific, account for 47, 86, 95, and 68 thousand boepd respectively.

Next to this, OMV operates three refineries, supporting their commercial customers and retail network throughout Europe with filling stations in ten countries. OMV also owns a refinery in the UAE, alongside a 15% ownership in Abu Dhabi National Oil Company (ADNOC) Refining and ADNOC Global Trading (included in our benchmark as well), with refineries representing a total processing capacity of over 500 kilobarrels per day. 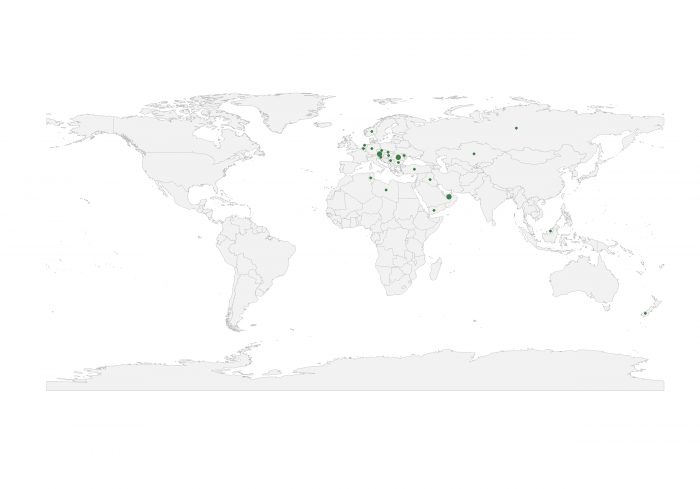 Data based on company’s 2020 annual report. Petrochemical divisions are not covered as they are not in scope of methodology.

Origin is one of Australia’s leading energy providers. Next to energy generation and retailing, it has gas operations across the country. Origin reported 4,828 employees and contractors in the country in 2020, with highest employment in the states of Queensland, Victoria and New South Wales. 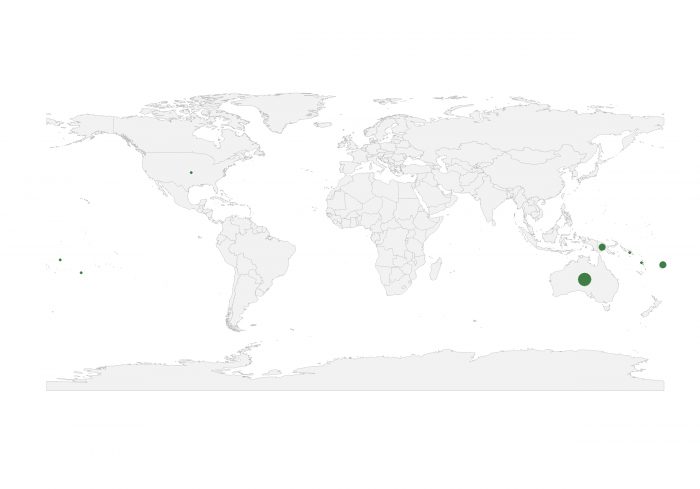 As the largest primary oil and gas company in Indonesia, Pertamina is a major player in Indonesia’s industry and serves the daily energy demand of the world’s fourth largest population.

Pertamina is the largest state-owned oil and gas company in Indonesia, predominantly operating within the country. With six refineries in the country, Pertamina produced 900,840 barrels of oil equivalent per day (boepd) in 2019, accounting for 49.97% of Indonesia’s total oil and gas production, while the global daily oil production in 2019 was 95.19 million boepd. Pertamina has 27 exploration and production operations (working areas) overseas in 13 countries which are managed by the company’s subsidiary Pertamina International EP directly or under its subsidiary, Maurel & Prom.

In 2019, these operations produced 104,110 boepd.
The company reported 32,449 permanent employees in 2019 for the whole group, and 13,738 employees for its holding company. Pertamina also operates various subsidiaries across the oil and gas industry’s value chain, including PT Patra Trading and PT Patra Logistik. These subsidiaries allow it to undertake integrated business activities ranging from exploration, production and refining to logistics, marketing and trading of petrol products. Next to this,

Pertamina has subsidiaries operating in surrounding countries to serve their energy needs, such as Pertamina International Timor SA. 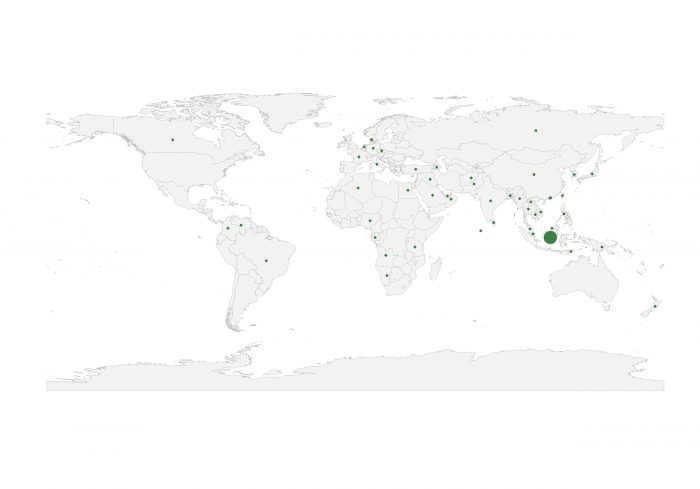 Considering the widely distributed operations of the oil and gas companies, and their great impact on local economy, it is critical to understand whether they are driving on a low-carbon transition pathway that aligned with the regions’ ambitions where they operate. This table gives you a snapshot of how these five companies are faring in terms of their decarbonisation ambition within the regional context.

In this table, we outline the regional climate policies in the five countries where the companies are headquartered. We provide an overview of the countries’ current nationally determined contribution (NDC) targets as per the Paris Agreement, as well as government-led national, long-term decarbonisation goals. Next to this, on the right side of the table, we show the companies’ decarbonisation plans, which were analysed in our benchmark using ACT methodologies to understand their readiness for the low-carbon transition.

These comparisons clearly show how there are different levels of alignment between the targets of the oil and gas companies and the decarbonisation plans of their headquartered countries.
OMV has set targets to reduce its scope 1 and 2 emissions intensity by 60% and 25% for its E&P and refining operations respectively. However, the company lacks an emissions reduction plan aligned with the 1.5°C scenario for its scope 3 emissions, which made up 91% of its total emissions in 2019. The company sets its target to be carbon-neutral by 2050 for its scope 1 and 2 emission. This is not aligned with Austria’s national target and long-term goal to be carbon neutral by 2040.

While Pertamina sets its target to reduce 30% of its absolute scope 1 and 2 targets by 2030 compared to 2010, it only plans to reduce 4% of its absolute scope 1 and 2 emissions by 2030 compared to 2020. This target is not aligned with a 1.5°C scenario. Moreover, the company has not yet reported a target for its scope 3 emissions. Meanwhile, Indonesia shows lack of ambition in its own decarbonisation goal and needs to ramp up its national-level plan for the low-carbon transition.

Origin goes further in its decarbonisation plans than its country of headquarters. Origin has initiated its low-carbon journey by setting science-based targets, and now plans to upgrade its target to also align with a 1.5°C pathway. At the same time, the company aims to be net-zero by 2050. However, Australia has not yet published a long-term decarbonisation goal for the country.
Ecopetrol targets to achieve a 50% reduction in scope 1, 2 and 3 emissions by 2050, and carbon neutrality in scope 1 and 2 emissions by 2050. However, this target still lags behind Colombia’s national ambition to be entirely carbon neutral by 2050. As the largest primary oil and gas company in Colombia, Ecopetrol will need to step up its efforts and play a key role in the nation’s low-carbon transition.

Exxon Mobil shows a lack of ambition in its target-setting. Though Exxon Mobil plans to reduce its scope 1 and 2 emissions intensity by 15 -20% by 2025 compared to 2016, the company’s target does not align with the pathway recommended by the science-based targets. The company also doesn’t cover its scope 3 emissions in its target, even though these are a major component of its total emissions. Exxon Mobil’s goal also does not align with the ambition of its country, USA, to become carbon neutral by 2050. As one of the world’s largest companies, Exxon Mobil has a vital role to play in achieving a low-carbon economy, not only in the USA but, given its wide global presence, across the world.

These five companies provide a snapshot of the wide impact that oil and gas companies have within the countries where they operate as well as globally. They show how oil and gas companies are significant in their regions and internationally in terms of their subsidiaries and the number of people they employ, as well as considering the scale and reach of their operations. These companies have a big influence on the regional and world economies and thus they have a crucial role to play in achieving the low-carbon transition of economies.

The comparisons of targets between companies and between the company and the country where it operates, show that there remain opportunities for companies to improve their low-carbon performance. Setting up specific targets for scope 3 emissions reductions, which is one of the biggest emissions source for oil and gas companies, constitutes one notable area for improvement. The findings from our benchmark assessment show that most oil and gas companies are still not in line with their targets and ambitions to achieve a low-carbon transition that meets the 1.5°C scenario. Their targets need to be stepped up, their commitments need to be made firmer.

Given that oil and gas is a high-emitting industry in every country’s economic portfolio, it is also essential for both companies and countries to work towards better alignment in their decarbonisation plans. We hope the cases of Ecopetrol, Exxon Mobil, OMV, Origin Energy and Pertamina will form the basis for greater engagement between these influential companies and national governments, as well as between companies and their allies and stakeholders in the locations where they operate.

WBA will continue to disseminate the data and key findings of the global Oil and Gas Benchmark at country and regional levels by convening dialogues, contributing to policy development and engaging directly with the companies, as we’ve done during the benchmark development and the publication cycle. If we are to activate effective action on the low-carbon transition, it’s imperative that corporate and government ambitions for the decarbonisation of our energy systems are aligned, and it’s imperative for us all to play our role.