Alignment of company emissions targets with the Paris goal of holding the increase in the global average temperature to well below 2 degrees is a key indicator of long-term commitment to the low-carbon transition. A shocking 46 of the 50 companies assessed do not have emissions reduction targets aligned to the well-below 2-degrees Paris Agreement goal, and 23 of these have not set any emissions reduction targets or have no targets that extend beyond 2022. This demonstrates an overwhelming lack of ambition and commitment to the Paris Agreement.

Even carbon-neutrality targets set by companies such as Vattenfall, Iberdrola, EDF and E.ON are not ambitious enough to meet the rate of emissions reductions required by the well-below 2-degree pathway. This is because the electric utilities sector, with its potential for rapid decarbonisation, is expected to reach negative emissions in many regions by 2050. Negative emissions mean a company removes more emissions than it produces. However, companies are too slow in developing the carbon capture and storage technologies to do this (see key finding 5). Of the 50 companies assessed, 92% must have negative emissions by 2050 to be aligned with the well-below 2-degree scenario.

Consequently, just four companies have targets ambitious enough to meet the well-below 2-degree scenario. These are high-ranking companies Enel, EDP, Ørsted and AES. Ørsted, EDP and Enel are on track to achieve their targets. However, AES is not currently on track to meet its ambitious goal of a 70% reduction by 2030, compared to a 2016 base year. The company still has time to correct its course, though it is likely to have to retire some of its fossil fuel portfolio, which accounted for 68% of installed capacity in 2018.

Below shows the targets of the top five ranking companies overall. The target pathways set by the companies are shown in blue, and  their their well-below 2-degree pathways are shown by the black dashed lines. 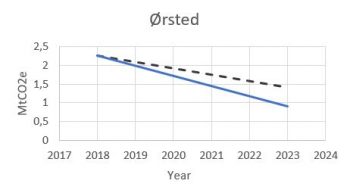 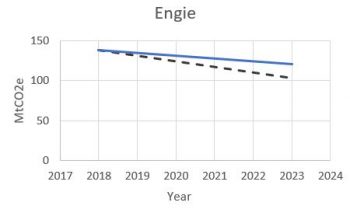 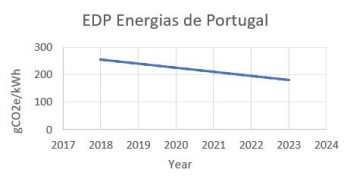 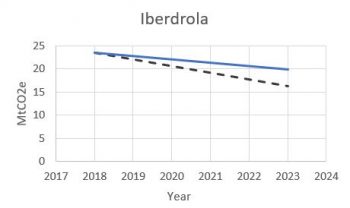 *This was too late for inclusion in the quantitative part of the performance assessment.