In order to support the achievement of the Paris Agreement’s goals of holding temperatures to well below 2 degrees and pursuing efforts to limit the temperature increase even further to 1.5 degrees, automotive companies must contribute to the fundamental shift to low-carbon vehicles. The 30 companies included in the 2020 Automotive Performance Update have been identified due to their keystone features: dominating and controlling revenues and production, connecting systems through supply chains and subsidiaries, and influencing governance processes and institutions. They play a particularly central role in the global efforts to combat climate change and, therefore, can have substantial leverage in driving the decarbonisation transformation. However, if these companies cannot rapidly scale up their low-carbon vehicle sales, they will struggle to reduce emissions at the rate required by the Paris Agreement’s goals and expected by stakeholders. This assessment aims to hold them accountable to deliver on the Paris Agreement’s goals.

Companies were assessed based on their low-carbon light duty passenger vehicles sales. For 26 companies, high-emitting vehicles accounted for over 90 percent of total sales in 2019, with the share of sales from these vehicles exceeding 95 percent for 23 of these companies.

Progress in absolute low-carbon vehicle sales across the sector is shown by summing the sales of all 30 companies. This shows that the total low-carbon vehicle sales share rose from 0.27 percent of total sales in 2014 to 2.29 percent in 2019. However, this is far from the 6.2 percent required for 2019 in order to align with the automotive sector’s well below 2-degree pathway.

The increase in low-carbon vehicle sales varied significantly among companies, with those headquartered in China displaying more rapid growth. After Tesla, which only sells electric vehicles, the next three companies with low-carbon vehicles accounting for the highest share of sales in 2019 are all China-based: BYD with 47.9 percent, Anhui with 25 percent, and BAIC with 13.4 percent. However, these companies’ total vehicles sales are small in comparison to most of the other companies assessed (see Figure 2). To achieve the significant emission reductions required by the Paris Agreement, it is imperative that larger automotive manufacturers increase their share of sales from low-carbon vehicles. The biggest three companies by number of vehicles sold had small shares of low-carbon vehicles, with Volkswagen having a share of 1.2 percent, Toyota a share of 0.6 percent and General Motors 1.4 percent. As the world moves to a low-carbon transportation system, these incumbents risk losing market share to disruptors such as Tesla unless they rapidly scale up their low-carbon vehicle sales. 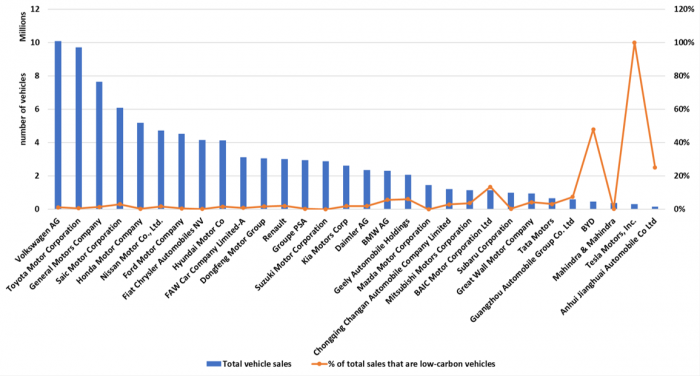 The market shift in consumer preference and modes of transport

The companies assessed have the influence to be active agents of change and play a critical role in driving decarbonisation They should, therefore, be incentivising consumers to buy electric vehicles if car ownership is necessary and to use ride-hailing, car-pooling and car-sharing options where possible. They should also collaborate within the automotive sector to improve low-carbon infrastructure, including electric vehicle charging, and invest in the mobility of the future to achieve true transformation through a shift in the most-used modes of passenger transport.

The limited progress made in increasing low-carbon vehicle sales appears connected to limited efforts to promote low-carbon models. For 16 of the companies assessed, no evidence was found of robust campaigns or financial incentives to boost low-carbon vehicle sales. This is surprising given automotive manufacturers’ experience of advertising and providing financing options for their vehicles. Some top performing companies in this area both advertised and provided financial incentives for low-carbon vehicles. For example, SAIC provided a ¥10,000 (US$1,431) discount to retailers for the first 10,000 orders of its MG EZS model series in China as well as an eight-year warranty and a zero interest rate for a year. Likewise, Nissan’s “No Charge to Charge” promotion provides 24 months of complimentary public charging when its LEAF model is purchased or leased from selected dealers in the US.

Of those assessed, 22 companies attempt to address the lack of charging infrastructure, which remains a significant barrier to consumer uptake of electric vehicles. Tesla is one of the most advanced companies in this area, having installed a network of 1,971 Supercharger stations. In Europe, the IONITY joint venture between BMW, Daimler, Ford, Volkswagen, Hyundai and Kia has been working to install 400 rapid charging stations along major traffic routes. BAIC was the only company assessed that displayed efforts to develop battery swapping stations where depleted batteries can be exchanged for fully charged batteries. The company built 160 battery swapping stations by 2019 and plans to build 3,000 stations by the end of 2022 capable of serving 500,000 electric vehicles, as a result of its ¥10 billion (US$1.43 billion) investment.

A shift in passengers’ most used modes of transport is also crucial for decarbonisation and offers new low-carbon business opportunities. Of those assessed, 24 companies offer some form of Mobility as a Service (MaaS) such as ride sharing, car-pooling or rental services. However, revenue from these business activities is still minor for many companies. For example, Groupe PSA aims to gain €400 million (US$448 million) in revenue by 2021 from its Free2Move and other mobility services, but its total revenue in 2019 was €74.7 billion (US$ 88.2 billion).

Government policy can be key in either enabling or slowing low-carbon vehicle sales. For example, high sales of low-carbon vehicles in China have been supported by the government’s New Energy Vehicle Mandate. Moreover, companies can have significant influence on policy either through direct input and lobbying or indirectly through industry trade associations. While automotive manufacturers should take a positive, transparent and proactive approach to climate policy to show commitment to the low-carbon transition, there appears to be a sector-wide reluctance to do so.

Of those assessed, 27 companies do not have any policies in place to managing their engagement with trade associations that oppose climate policy. Kia, Toyota and Volkswagen showed some evidence of a policy but did not fulfil the best practice elements as set out in the AAA framework for climate policy leadership. Furthermore, several companies were found to have opposed fuel economy regulation. General Motors, Toyota and Fiat Chrysler opposed California’s decision to continue enforcing the more stringent fuel economy standards introduced under the Obama administration, then removed under the Trump administration. In contrast, Ford, Volkswagen, BMW, Honda and Volvo Cars agreed to comply with California’s standards. In the European Union, the influential European Automobile Manufacturers Association (ACEA) – of which 12 companies assessed are members – has lobbied against the introduction of more ambitious targets regarding CO2 emissions from vehicles.

Several national and subnational governments are increasingly targeting a phaseout of the internal combustion engine (ICE) altogether. California has set an ICE phaseout target of 2035, France of 2040, and the UK is consulting on a 2030 phaseout date. Support from automotive companies for a full phaseout of the ICE would be transformative. However, no company assessed was found to have set a credible deadline by which they will realistically only sell low-carbon vehicles. An increasing number of the companies assessed are setting targets that aim for a high percentage of their sales to come from low-carbon vehicles, but this ambition needs to rapidly increase for the automotive sector to achieve the decarbonisation required under the Paris Agreement’s goals.